Twenty-three years after Britain's handover of Hong Kong to China, the government in Beijing has begun to deepen its control over the politics of the special administrative region. Despite mass protests and muted criticism from the West, Beijing's communist government has put into place rules constraining democracy and free speech.

Joshua Wong was born just one year before the handover. He came onto the political scene in 2011 aged 14, when he founded Scholarism and successfully protested against the enforcement of Chinese National Education in Hong Kong. He has been arrested numerous times for his protesting and activism and has served more than 100 days in jail.

He has been named by Time, Fortune, Prospect and Forbes as one of the world’s most influential leaders. In 2018 he was nominated for the Nobel Peace Prize for his leading role in Hong Kong's Umbrella Movement. He is the former secretary-general of Demosistō. He has been the subject of two documentaries, including the Netflix original, Joshua: Teenager vs Superpower.

Wong joins us live from Hong Kong for a discussion of the students hoping to save democracy in Hong Kong and the Thai students who are looking to the Hong Kong activists for tactics in their own protests for reforming their political system.

This program will be online-only; pre-register for a link to the live-stream event 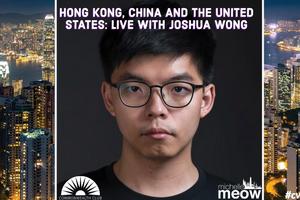