Since leaving his role as White House press secretary in 2017, Sean Spicer has launched a successful talk show and written a best-selling book. Now, he’s focusing on the hardened state of politics in America.

In his new book, Leading America, Spicer argues that too many look at the world as a zero sum game—either you're with them 100 percent, or you're the enemy. Whether you're in politics, media, academia, or entertainment, he says it's the same story.

The former White House press secretary and communications director analyzes our current political moment through the lens of politics and culture and argues that everyone can and should take a stand to uphold their rights and values.

This is an online-only event; pre-register to receive a link to the live-stream program

In Conversation with Matt Shupe 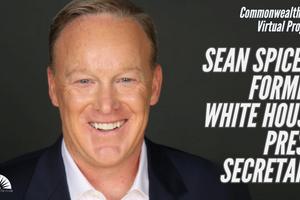