The Making of Latino Identity: An American Story

As the Latino population grows in every region of the United States, Latinos are increasingly playing an influential role not only in presidential politics, but throughout American culture. Yet the unique racial identity of Latinos is not a new story for the country.

Latinos have long influenced everything from electoral politics to popular culture‚ yet many people instinctively regard them as recent immigrants rather than a longstanding racial group. Why is this, and what does it have to do with how Americans view and identify different racial groups in the country? In her new book, Inventing Latinos‚ Laura Gómez, a leading expert on race law‚ and society at UCLA‚ illuminates the making and re-making of Latino identity that has spanned centuries‚ leaving a permanent imprint on how race operates in the United States today.

Throughout her career, Professor Gómez has explored how Latinos have become recognizable as a racial group in the United States. She traces the roots of Latino identity to Spanish colonization of the New World, as well as the legacy of American imperialism in Mexico, Central America and the Spanish Caribbean in the 19th and 20th centuries. This complicated history, combined with discrimination, has always positioned Latinos as “perpetual foreigners” in the United States. Latinos, however, are pushing back more than ever on this identification and having their voices heard on these and other issues.

Please join us for an important discussion on race and history, just weeks before Latinos are expected to play an influential role in the presidential election.

This is a free event, but donations are welcome during the registration process

Copies of the speakers' book are available during registration (for delivery to U.S. domestic addresses only) 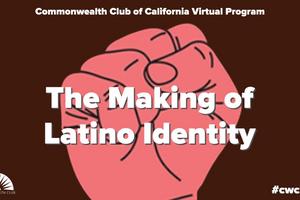 THE MAKING OF LATINO IDENTITY: AN AMERICAN STORY