Over the past few decades, U.S. corporations have increased their economic and political power. Yet critics say Americans are only now awakening to the grave domestic threat this concentrated private sector power presents to our country. Open Market Institute Executive Director Barry Lynn says that monopolies today control almost every corner of the American economy with a concentration of wealth and power in the hands of the few. The result, says Lynn, is also a stripping away of our liberty and freedoms to work, live and communicate how people want, instead of how companies want.

Nowhere is this more clear than in the rise of online monopolists such as Google, Facebook and Amazon―designed to gather our most intimate secrets and use them to manipulate our personal and group actions. Not only have these giant corporations captured the ability to manage how we share news and ideas with one another, Lynn says they increasingly enjoy the power to shape how we move and play, and speak and think.

Please join us for an important discussion of monopoly power with two people at the cutting edge of fighting back against it. Barry Lynn, head of the Open Markets Institute and longtime critic of unbounded capitalism, is the author of the new book Liberty from All Masters: The New American Autocracy vs. the Will of the People, a treatise against America’s new monopolies. Roger McNamee has emerged as one of the most articulate critics of social media companies and how their design and business models pose serious dangers to people, our economy and our society. In 2019, McNamee spoke at the Club about these issues.

This is an online-only program; pre-register to receive a link to the live-stream video

Executive Director, Open Markets Institute; Author, Liberty from All Masters: The New American Autocracy vs. the Will of the People 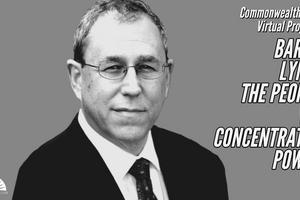