Who Gets to Vote in America?

Going into a pivotal national election, voter suppression threatens to tilt election results in states across the country and drown out the rising influence of both minority and young voters in America.

After the U.S. Supreme Court gutted the Voting Rights Act in 2013, voting restrictions, predominantly engineered by Republicans, have proliferated in size and scale. Using tactics such as voter ID laws, voting precinct consolidation, gerrymandering and voter purging, the people in charge of voting at the state and federal levels have made it harder for non-white, poor and young voters to cast their ballots.

We’re excited to host a discussion with individuals who have dedicated their careers to making sure everyone who wants to vote in America has the right to do so. They’ll discuss the consequences of voter suppression, what everyone can do to advocate, and the fight ahead.

Ari Berman is a senior reporter for Mother Jones, covering voting rights. In addition to voting rights, his writing covers American politics and the impact of money on our electoral system. His critically acclaimed book Give Us the Ballot covers the time since the dramatic passage of the Voting Rights Act in 1965, the turbulent forces it unleashed, and the continuing battles over race, representation and political power.

Alex Padilla has served as California’s secretary of state since 2015, and he’s prioritized increasing voter registration and participation and strengthening voting rights. While California has the highest number of registered voters in America at more than 15 million people, the state’s population of almost 40 million means it has the second-lowest percentage of registered voters when compared to population. With initiatives like the Motor Voter Act, Padilla and his office are working to raise that number.

As president of the Brennan Center for Justice at NYU School of Law, Michael Waldman leads the center’s initiatives on voting rights, money in politics, criminal justice reform and constitutional law. The Brennan Center is widely regarded as a leading organization on voter rights and election security, and Waldman and his team are on the forefront of the fight to vote.

In partnership with the Brennan Center for Justice

This is a free event; we welcome donations made during registration to support the production of our online programming

This is an online-only program; pre-register to receive a link to the live stream

Senior Reporter, Mother Jones; Author, Give Us the Ballot: The Modern Struggle for Voting Rights in America 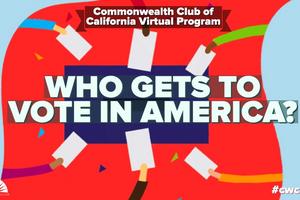 Who Gets to Vote in America?