Theodore Voorhees: Kennedy and Khrushchev Play the Double Game Over Berlin and Cuba

This October, Monday Night Philosophy travels back six decades to two different October crises: the "Checkpoint Charlie" tank confrontation in Berlin in October 1961 and the Cuban Missile Crisis in October 1962. Join us for a virtual conversation with Theodore Voorhees, Jr., who used new as well as previously under-appreciated documentary evidence to link the Cuban Missile Crisis back to the Checkpoint Charlie tank standoff a year earlier, crafting an original analysis of these two Kennedy-Khrushchev political showdowns. Voorhees concludes that much of the Cold War rhetoric both leaders employed was mere posturing. In reality, neither had any intention of starting a nuclear war.

Voorhees also reexamines Khrushchev’s and Kennedy’s leadership, decisions and rhetoric in light of the under-appreciated role that domestic politics played in President Kennedy’s decision-making, initially exacerbating the risks the country faced, but ultimately producing a quick, peaceful resolution to the Cuban Missile Crisis.

To purchase the book that is the focus of this program, The Silent Guns of Two Octobers, and receive a 40 percent discount and FREE shipping, please place orders here and use the promotion code UMSILENTCWC at checkout

This is a free, online-only program; pre-register to receive a link to the live-stream program 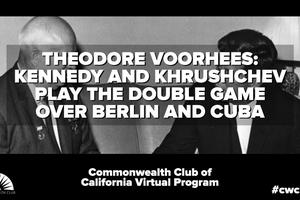 Theodore Voorhees: Kennedy and Khrushchev Play the Double Game Over Berlin and Cuba