A Conversation with John Lithgow

John Lithgow’s acclaimed acting career has seen him star in shows like "3rd Rock from the Sun" and "The Crown" and films such as Bombshell and The World According to Garp. Now, he’s following up last year’s best-selling book, Dumpty, with a brand-new collection of satirical poems chronicling the age of President Donald Trump.

Trumpty Dumpty Wanted a Crown is darker and more hard-hitting than ever. Lithgow writes and draws with wit and fury as he takes readers through another year of shocking events involving Trump and his administration. His uproarious poems and illustrations encompass Trump's impeachment, the COVID-19 pandemic, the Black Lives Matter protests, and much more.

Join Lithgow as we laugh and pause to remember some of the most defining moments in recent history—as he skewers the reign of “King Dumpty” one stanza at a time.

All tickets include a copy of John Lithgow's new book, Trumpty Dumpty Wanted a Crown; books will be shipped to the address provided at checkout (U.S. domestic only) 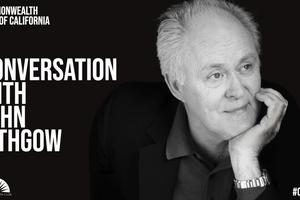 A Conversation with John Lithgow