At the recent Global Training in July 2020, former Vice President Al Gore and the Climate Reality Project continued their call to prioritize and center the environmental justice work of communities of color and indigenous communities. In this spirit, we invite you to learn about and engage with Greenaction for Health and Environmental Justice's "We Can't Breathe" campaign in San Francisco's Bayview and Hunters Point (BVHP) neighborhoods, a low-income community of color (33.7 percent African American, 30.7 percent Asian, and 24.9 percent Latinx per the 2010 Census) where residents suffer from high rates of asthma and cancer and where radioactive waste and toxic contamination at the Hunters Point Naval Shipyard Superfund site and multiple other contaminated sites are located.

As one of the lowest-lying points in San Francisco, BVHP will also be first impacted by rising oceans, which have already risen by almost 8 inches as of 2016 and which threaten to create flooding of hazardous and radioactive waste of neighborhoods, transportation infrastructure, and the entire San Francisco Bay, while several hundred new luxury homes have been built next to and possibly on top of radioactive contamination, and 10,000 more homes are planned at the contaminated Shipyard Superfund Site where critics complain that radioactive and toxic cleanup has been marred by fraud and lax standards. Speakers will also discuss the August 25 Car Caravan Protest to San Francisco City Hall for the Bayview Hunters Point Environmental Justice "We Can't Breathe" Campaign.

This is a free, online-only program; pre-register to receive a link to the live-stream event; we welcome donations made during registration to help support the production of our online programming 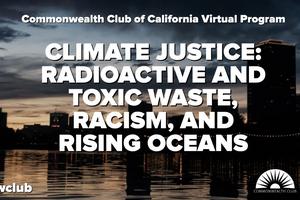