Join us for a virtual conversation with Erwin Chemerinsky and Howard Gillman, two of America's leading constitutional scholars, about the issues surrounding the freedom of religion clauses in the Bill of Rights.

Views on the proper relationship between the state and religion have been deeply divided throughout American history. But with the recent changes in the composition of the United States Supreme Court, First Amendment law concerning religion might shift dramatically if the wall separating church and state continues to be thinned out. Chemerinsky and Gillman defend a robust view of both First Amendment religion clauses and work from the premise that the establishment clause was precisely worded to make the federal government strictly secular, not allowing any special exemptions for religious people from neutral and general laws that others must obey.

Chemerinsky and Gillman provide both a pithy primer on the meaning of the religion clauses and a broad-ranging indictment of the Supreme Court's misinterpretation of them in recent years, arguing that a separationist approach is most consistent with the concerns of the founders who drafted the Constitution and with the needs of a religiously pluralistic society in the 21st century.

This is a free program; please consider making a donation during registration

Chancellor, University of California, Irvine; Faculty Appointments in the School of Law and the Departments of Political Science, History, and Criminology, Law and Society; Co-Author, The Religion Clauses: The Case for Separating Church and State 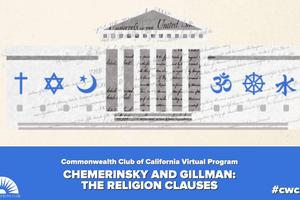