Ken Follett is one of the world's best-loved authors, selling more than 170 million copies of his 31 books. Follett's first bestseller was Eye of the Needle, a spy story set in the Second World War. In 1989, The Pillars of the Earth was published and has since become Follett's most popular novel. It reached number one on bestseller lists around the world and was an Oprah's Book Club pick. Its sequels, World Without End and A Column of Fire, proved equally popular, and the Kingsbridge series has sold more than 40 million copies worldwide.

Mr. Follett's latest novel, The Evening and the Morning—a prequel to The Pillars of The Earth—takes readers on an epic journey back to the year 997, the end of the Dark Ages. England is facing attacks from the Welsh in the west and the Vikings in the east. Those in power bend justice according to their will, regardless of ordinary people and often in conflict with the king. Without a clear rule of law, chaos reigns.

Join us for a rare and intimate conversation with this renowned author whose work certainly provides historical lessons for today.

This is an online-only program; pre-register to receive a link to the live-stream program

In Conversation with Lee Child 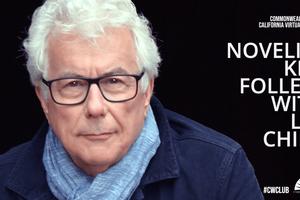