Join us for a discussion with journalist Laura Flanders about the state of our country, politics, progressive talk radio, women in radio, and her brand new show on PBS.

Laura Flanders is an Izzy-Award winning independent journalist, a New York Times bestselling author and the recipient of the Pat Mitchell Lifetime Achievement Award from the Women’s Media Center. By 1990 she was co-hosting "CounterSpin," the weekly radio report from the media watch group FAIR and reporting from Central America, the Middle East and Europe for media outlets like In These Times, New Directions For Women, Ms., Outweek, The Nation, and Pacifica Radio.

The mega-mergers of the 1990s left the media landscape packed with ads and partisan punditry, but devoid of news from most of the country or the world. Invited to host a daily call-in, Laura launched “Your Call” on San Francisco's public radio station KALW in 2001 and then "The Laura Flanders Show" on Air America Radio to engage listeners in a deep-dive into the issues of the day. Supported by FreeSpeechTV, Laura moved to television in 2008, starting "GRITtv," a daily national news show that covered the financial crisis from the grassroots up. Laura emerged determined to introduce audiences to a wealth of people, places—and policy options—that other media ignored.

Her latest endeavor is "The Laura Flanders Show," which launched on public television stations in September 2020. The same year, Flanders received a Cultural Freedom Fellowship from the Lannan Foundation “for her tireless work as an independent journalist, interviewing activists who are creating solutions to economic injustice and catastrophic environmental destruction. Her body of work helps the American public begin to imagine alternatives.”

Don't miss this conversation with a pioneering journalist about the issues the media doesn't discuss enough, what it discusses too much, and why it matters. 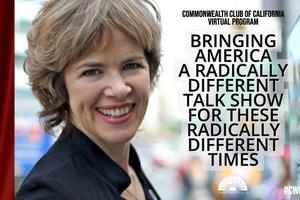