Compromised: Peter Strzok and the Investigation of Donald Trump

On August 10, 2018, veteran FBI agent Peter Strzok was fired after personal text messages from 2016 disparaging then-candidate Donald Trump were released. President Trump celebrated, writing on Twitter “Fired FBI Agent Peter Strzok is a fraud, as is the rigged investigation he started. There was no Collusion or Obstruction with Russia, and everybody, including the Democrats, know it.”

But Strzok’s story is anything but straightforward. He led the FBI’s investigation into both Hillary Clinton’s private email server and Russia’s interference in the 2016 election, drawing the ire of conservative allies of the president. When his text messages were released, they provided ammunition for the conspiracy theory of a “deep state” out to undermine Trump’s presidency.

Join Strzok as he tells his side of one of the 21st century’s most explosive stories. He’ll draw on lessons from a long career in law enforcement and explain why he’s convinced that the commander in chief has fallen under the sway of America’s adversary in the Kremlin.

Copies of Compromised are available for purchase at checkout (U.S. domestic shipping only)

In Conversation with Adam Lashinsky 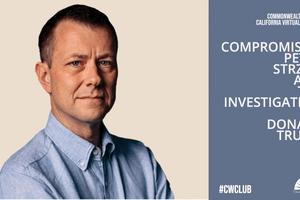 Compromised: Peter Strzok and the Investigation of Donald Trump