A September Surprise: The Week to Week Political Roundtable

You've heard of an October surprise—when a political campaign drops an unexpected bit of news highlighting (or making up) a scandal about the opponent? This entire campaign has been a surprise, so we certainly expect an early surprise or two or three in September.

Join us for a special Election 2020 edition of Week to Week, the political roundtable from The Commonwealth Club. Our panelists will discuss the latest political developments with intelligence, civility and probably quite a bit of humor.

This program is free for Commonwealth Club members

This program will be online-only; pre-register for a link to the live-stream event

Main image by visuals on Unsplash 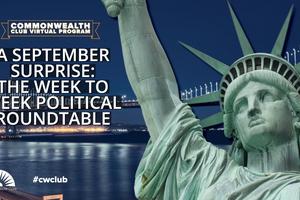 A September Surprise: The Week to Week Political Roundtable