In the lead-up to former Vice President Joe Biden selecting California Senator Kamala Harris as his 2020 running mate, there was a lot of armchair prognostication and claims about Harris' past and future. Much was made of her time as San Francisco's district attorney; some used it to defend her as a tough-on-crime prosecutor; others used it to portray her as a far-left DA who was weak on crime.

Niki Solis knows what Kamala Harris was really like as a DA, and she made her case for Harris in a recent op ed article in USA Today, "I worked with Kamala Harris. She was the most progressive DA in California." For nearly a quarter century, Solis has worked as a public defender. She is currently a deputy public defender in San Francisco; she was a manager in the public defender's office when Harris was the city's district attorney.

Join us for a timely conversation about crime and punishment, mercy and justice, and big-stakes politics. 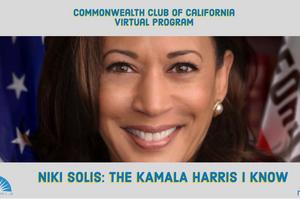