Governor Jerry Brown and Lesley Blume: The Nuclear Legacy of Hiroshima and Nagasaki

Right now, the Doomsday Clock reads “100 seconds to midnight,” according to the Bulletin of the Atomic Scientists—midnight representing the end of humanity as we know it from two simultaneous existential dangers—nuclear war and climate change. This setting is closer than the world has ever been to doomsday before, even during the height of the Cold War. This unnerving development speaks to the urgent relevance of panelist Lesley Blume's book Fallout and the need to reflect on the 75th anniversary of the Bomb.

The Hiroshima A-bomb was the single most destructive event of the 20th century, killing more than 100,000 people and decimating an entire city. Knowing this, Ms. Blume points out that the U.S. government embarked on a secret propaganda campaign to hide the true nature of the damage to Hiroshima and Nagasaki for fear that such blatant violence—mostly perpetrated against civilians—would tarnish our reputation at home and abroad. This cover-up included suppression of the Japanese and Western media, press junkets that downplayed the bombs’ radioactivity and any mention of sinister “Disease X” plaguing blast survivors, and misleading statements aimed at depicting the bomb as a humane and conventional weapon.

This conversation comes as the current administration considers resuming nuclear testing and commits to spending trillions to "modernize" nuclear weapons, and as the the dangers of nuclear miscalculation and blunder grow amid tensions with Russia, North Korea, China and Iran. Join Blume and former California Governor Jerry Brown, executive chair of the Bulletin of the Atomic Scientists and a longtime advocate for dialogue around nuclear issues, for an important discussion about the legacy of Hiroshima and Nagasaki and prospects for reducing the nuclear threat.

This program will be online-only; to receive access to it, you must pre-register for a link to the program

Lesley M.M. Blume
Journalist; Author, Fallout: The Hiroshima Cover-up and the Reporter Who Revealed It to the World 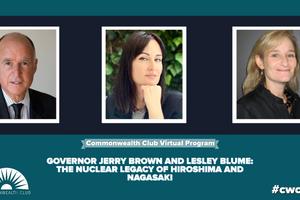 GOVERNOR JERRY BROWN AND LESLEY BLUME: THE NUCLEAR LEGACY OF HIROSHIMA AND NAGASAKI