In a world of “fake news,” President Donald Trump has labeled one network as telling his “truth”—Fox News. The president has developed a symbiotic relationship with Fox. Since the day Trump announced his candidacy, its pundits have consistently slandered Trump’s enemies and promoted his vision of America.

The president himself has also admitted to watching 6 hours of Fox News a day, even in the face of a disastrous pandemic and national economic crisis. He gets his brash personal and political actions legitimized by the network, and the network makes money off Trump-supporting viewers who willfully follow the network.

In Hoax: Donald Trump, Fox News, and the Dangerous Distortion of Truth, CNN anchor and Chief Media Correspondent Brian Stelter tells the twisted story of the mutually beneficial relationship between President Trump and Fox News and dives into a relationship that he argues comes at the expense of the American people.

This is a free, online-only program; register to receive a link to the live-stream video

We welcome donations to support our online programming; donations can be made during the registration process

Copies of Hoax are available for purchase at checkout (U.S. domestic shipping only) 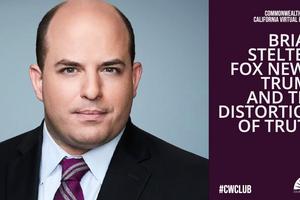