Dr. Charles Munger advocates good government, representative politics and a strong, responsible two-party system for California and the nation. Viewed by many as a moderate Republican, Dr. Munger campaigned in 2012 for California's current open "top two" primary and was the co-author of 2010's Proposition 20 to keep elected representatives separate from the process of creating congressional districts. He believes both have worked to encourage true representative government.

Dr. Munger served as chairman of the Santa Clara County Republican Party from 2012 to 2015. He holds a Ph.D. in atomic physics from U.C. Berkeley and is one of 8 children of Charles Munger, the vice chairman of financial holding company Berkshire Hathaway. As we head toward the election, come hear his unique thoughts on the power of political reform in an era where gridlock and cynicism abound .

This program will be online-only; to receive access to it, you must pre-register for a link to the program 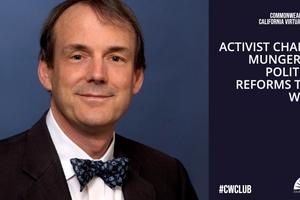