As America enters the final stretch of the 2020 election, many of the debates and issues that continue to dominate the campaign at the national and local levels stem from a resurgent global right-wing populism that led to the election of Donald Trump in 2016.

Four years later, this aggressive form of right-wing populism, infused with xenophobic nationalism, remains a powerful influence in the United States and around the world. Perhaps no one knows these issues better than Lawrence Rosenthal, the founder of the University of California Berkley’s Center for Right-Wing Studies. In his new book Empire of Resentment: Populism’s Toxic Embrace of Nationalism, Rosenthal paints a vivid sociological, political and psychological picture of the transnational quality of this movement, which is now in power in at least a dozen countries. In America and abroad, the current mobilization of right-wing populism has given life to long marginalized threats like white supremacy and anti-immigration fervor.

In 2016, renowned UC Berkeley professor Arlie Hochschild was among the first major sociologists to help explain Trump’s election. Her award-winning book, Strangers in Their Own Land: Anger and Mourning on the American Right, helped readers understand why so many American voters were attracted to Trump’s populist message and its negative undertones.

Please join us for a special conversation between two UC Berkeley stars—Rosenthal and Hochschild—as they discuss the how the transformation of the American far right made the Trump presidency possible—and what it portends for the future just two months out from the 2020 election.

Professor Emerita, University of California Berkeley; Author, Strangers in Their Own Land: Anger and Mourning on the American Right—Moderator 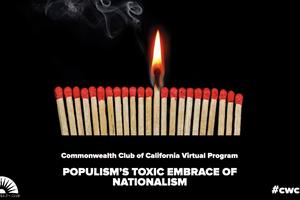