Few people can reflect as deeply on the politics of political life like Katie Hill, a former U.S. representative for California’s 25th congressional district. She ran for Congress before turning 30 and won her seat in November 2018 as a Democrat, beating a 26-year Republican incumbent. Her win, along with many others that year, was part of a larger turning of the tides in American politics — one centered around young women who were determined to lead change. Then, a mere 11 months later, Hill experienced a major sex scandal that ultimately resulted in her untimely resignation.

In her new book, She Will Rise: Becoming a Warrior in the Battle for True Equality, Hill recounts the complicated details of her story and the extreme sexism and abuse she faced at the hands of the highly invasive media. Join her at INFORUM, where she will share her experience with the longstanding double standard of sex and gender in politics, and how we can all play a part in dismantling these systems.

This program is free, though we invite you to make a donation during registration; this program will be online-only, and you must pre-register for a link to the program

Former Member of U.S. House of Representatives (CA-25); author, She Will Rise: Becoming a Warrior in the Battle for True Equality

Anchor and Host of "Forum," KQED–Moderator 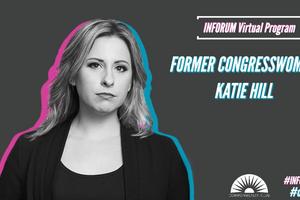