In late 1976, Ronald Reagan was dismissed as a man without a political future: defeated in his nomination bid against a sitting president of his own party, blamed for President Gerald Ford’s defeat, too old to make another run. Four years later, the former California governor would win the White House and expand a conservative revolution begun with Barry Goldwater that continues to impact the country’s politics today.

Reagan’s comeback was fueled by an extraordinary confluence: fundamentalist preachers and former segregationists reinventing themselves as militant crusaders against gay rights and feminism; business executives uniting against regulation in an era of economic decline; a cadre of secretive “New Right” organizers deploying state-of-the-art technology, bending political norms to the breaking point—and Reagan’s own unbending optimism, his ability to convey unshakable confidence in America as the world’s “shining city on a hill.” Backed by a reenergized conservative Republican base, Reagan ran on the campaign slogan “Make America Great Again”—and prevailed.

Rick Perlstein’s new book Reaganland is the story of how this all happened, tracing conservatives’ tough strategies to gain power and explaining why they endure four decades later. Over two decades, Rick Perlstein has published three essential works about the emerging dominance of conservatism in modern American politics. Reaganland is the saga’s final installment, and it comes just as the country heads into the final stages of the 2020 election, in which many say the politics embraced and pushed by Reagan and his supporters could meet their final test. Please join us for this timely discussion.

This is a free program; please consider making a donation during registration to support our online program production

This event is online-only; register to receive a link to the live stream program 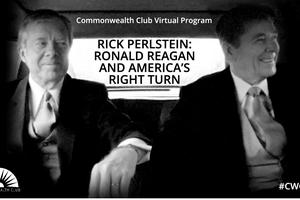