Join us for a virtual conversation between Alan Mikhail and Adam Hochschild about Mikhail's new book, God's Shadow. Although long neglected in European-centric world histories, the Ottoman Empire was a hub of intellectual fervor, geopolitical power and enlightened pluralistic rule. At the height of their authority in the 16th century, the Ottomans, with military dominance and monopolies over trade routes, controlled more territory and ruled over more people than any other world power of the time, forcing Europeans out of the Mediterranean and to the New World.

Mikhail recasts this Ottoman history by retelling it through the dramatic biography of Sultan Selim I (1470–1520). Born to a concubine, the fourth of his sultan father’s 10 sons, Selim's charisma and military prowess―as well as the guidance of his mother Gülbahar―allowed him to claim power in 1512 and then nearly triple the empire's territory, building a governing structure that lasted into the 20th century. Selim also fostered religious diversity, encouraged learning and philosophy, and penned his own verse.

Free program; please consider a donation during registration to support production of our online programs

Professor of History and Chair of the Department of History, Yale University; Author of God’s Shadow: Sultan Selim, His Ottoman Empire, and the Making of the Modern World

In Conversation With Adam Hochschild 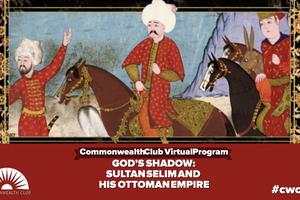