Robert Reich is at the forefront of the progressive fight for higher worker wages, expanded health care and stronger unions. He argues that years of stagnant wages and volatile job markets show that the financial system is fixed and serving only a select few with enough money to control it.

Reich shows how wealth and power have eviscerated the middle class and undermined democracy to its core. He exposes how people at the top propagate myths about meritocracy, corporate social responsibility and the “free market” to accumulate extraordinary capital and influence.

How can we restore confidence back in our political and economic system? Join us for a conversation with Robert Reich as he calls upon Americans to instill fundamental change and demand that democracy works for the majority once again.

Chancellor’s Professor and Carmel P. Friesen Chair in Public Policy, University of California Berkeley; Former U.S. Secretary of Labor; Author, The System: Who Rigged It, How We Fix It; Twitter @RBReich 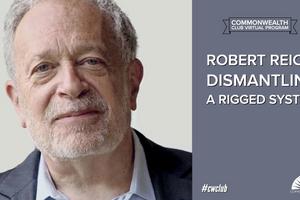