Miami might be the poster child of rising waters in the United States, but further inland, states are grappling with torrential flooding that is becoming the new norm. Last year, flooding in the southeast killed 12 people and caused $20 billion in damages. This year’s rains have already driven Mississippi into a state emergency, and Missouri is bracing itself with a levee system still in disrepair from last year’s storms.

Can infrastructure like floodplains, wetlands, and engineered barriers save riverside states from their new, saturated norm? How are communities adapting to a changing, wetter climate in some of the most conservative parts of the country? Join us for a conversation with Julia Kumari Drapkin, CEO and founder of ISeeChange, Ed Kearns, chief data officer at First Street Foundation, and Martha Shulski, director of the Nebraska state climate office, for a conversation on flooding in America.

This program is generously underwritten by the Water Foundation 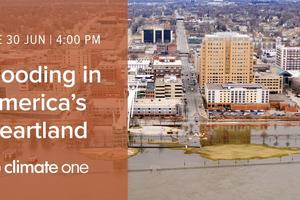