The votes of Black Americans are being blocked by the very nation they built. Despite the fact that Black voters played a huge role in the Democrats’ 2018 success, the political power of the Black vote continues to be suppressed and subverted by policies and media coverage alike.

In her new book, Say It Louder!, political analyst Tiffany Cross delivers a sweeping snapshot of American Democracy and the role that Black voices have played in its construction while also diving into the many political forces aligned to silence and undermine black voters. Cross describes the ways in which America’s composition was designed to exclude Black voters, but paradoxically would likely cease to exist without them. Pulling from her own expertise in media, histories of campaign leadership, and Black voter data, Cross describes the enduring efforts endlessly attempting to deny people of color the right to vote—a basic tenet of American democracy.

Join us for timely conversation about the Black vote, the future of our nation’s politics and what to pay attention to in the upcoming November election.

Copies of Say It Louder! are available for purchase at checkout

In Conversation with Aimee Allison
Founder and President, She the People; Twitter @aimeeallison
Format 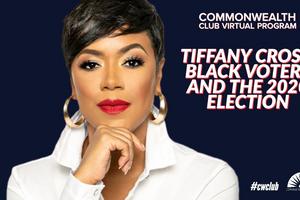