The murder of George Floyd has sparked a momentous, national wave of protests and calls for police reform. Activists across America and around the globe are now asking the same question: How can elected officials effectively respond to this moment?

San Francisco District Attorney Chesa Boudin was elected in 2019 on a platform of criminal justice reform, with the goals of ending mass incarceration and eliminating cash bail. He has responded to the social unrest by doubling down on his efforts to reduce racial disparity, as he understands that people of color are disproportionately affected by crime and police brutality.

Elected during the historic 2018 midterms, Rep. Ayanna Pressley is a leader of the push for criminal justice reform in Congress. In late 2019, she introduced the People’s Justice Guarantee, a radical reimagining of the American criminal legal system that would center the conversation of reform around the voices of the people most impacted by injustice in America.

Join DA Boudin and Rep. Pressley at INFORUM and The Commonwealth Club, where they will discuss police accountability, their roles in the future of police reform and this pivotal time in American culture.

This will be online-only, and you must pre-register for a link to the program 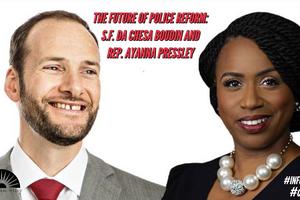