David Gergen is professor of public service and founding director of the Center for Public Leadership at the Harvard Kennedy School, positions he has held for more than a decade. In addition, he serves as a senior political analyst for CNN and works actively with a rising generation of new leaders. In the past, he has served as a White House adviser to four U.S. presidents of both parties: Nixon, Ford, Reagan and Clinton.

Professor Gergen's work as director of the Center for Public Leadership has enabled him to work closely with a new generation of younger leaders, especially social entrepreneurs, military veterans and Young Global Leaders chosen by the World Economic Forum. Through the generosity of outside donors, the Center helps to provide scholarships to more than 100 students a year, preparing them to serve as leaders for the common good. The Center also promotes scholarship at the frontiers of leadership studies.

In the 1980s, he began a career in journalism. Starting with "The MacNeil-Lehrer NewsHour" in 1984, Gergen has been a regular commentator on public affairs for about 30 years. Twice he has been a member of election coverage teams that won Peabody awards, and he has contributed to two Emmy award-winning political analysis teams.

Join one of America's most respected political observers for a discussion of the country's challenges and opportunities at this crucial time in history.

Notes
This program will be online-only; to receive access to it, you must pre-register for a link to the program 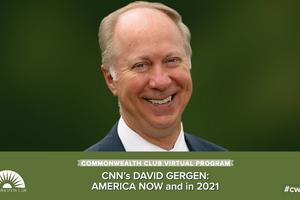