Join us for a virtual conversation with best-selling author, A. J. Baime, to discuss his latest book, the thrilling story of the 1948 presidential election, during which Truman mounted a remarkable comeback and staked a claim for a new course for America.

On the eve of the 1948 election, America was a fractured country. Racism was rampant, foreign relations were fraught, and political parties were more divided than ever. Americans were certain that President Truman's political career was over, his own staff did not believe he could win, nor did his wife Bess. But win he did.

Baime sheds light on one of the most action-packed six months in American history, as Truman not only triumphs, but also oversees watershed events: the Marshall Plan, the creation of Israel, the origins of the Cold War, and the first desegregation of the military. Not only did Truman win, he succeeded in guiding his country forward at a critical time with high stakes and haunting parallels to current events.

This program was previously scheduled for June 29

Copies of Baime's book may be purchased during registration

Author, Dewey Defeats Truman: The 1948 Election and the Battle for America's Soul 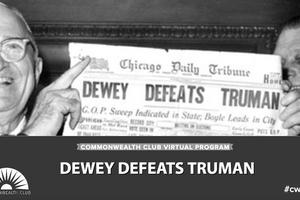