As President Trump seeks a second term in office, the apparent makeover of the GOP from a tax-cutting old guard into a populist new guard is a critical part of the upcoming 2020 election. But how much of this is just an appearance, and how much is a real shift among Republicans? In their new book, Let Them Eat Tweets, best-selling authors and political scientists Jacob S. Hacker and Paul Pierson offer a definitive answer: Trump isn’t a break with the GOP’s recent past. On the contrary, he embodies its tightening embrace of plutocracy and right-wing extremism―a dynamic Hacker and Pierson call “plutocratic populism.”

As they argue in this new book and elsewhere, the GOP serves its plutocratic “masters” to a degree without precedent in modern global history. Today’s Republicans have doubled down on a truly radical, elite-benefiting economic agenda while at the same time making increasingly incendiary racial and cultural appeals to their almost entirely white base. Hacker and Pierson’s new book demonstrates that since the early 1980s, when inequality started spiking, extreme tax cutting, union busting, and deregulation have gone hand-in-hand with extreme race-baiting, outrage stoking, and disinformation. Instead of responding to the real challenges facing voters, they say the Republican Party offers division and distraction―most prominently in the "racist, nativist bile" of the president’s Twitter feed.

What does it mean for the country and the upcoming election when reactionary plutocrats and right-wing populists have become the two faces of one of the country’s two major parties? Please join us for an important conversation on these topics as America prepare for the 2020 election.

This is a free, online-only program; please pre-register to receive a link to the live-stream event

In Conversation with E.J. Dionne, Jr. 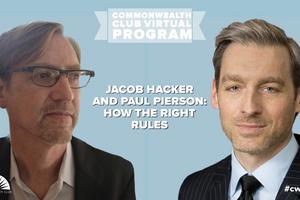