An Archaeology of Catastrophe: Troy and the Collapse of the Bronze Age

In this discussion, the third in a series on the relation between catastrophe and narrative, Homer scholar Dr. James Porter and poet Gillian Conoley will discuss how disaster and catastrophe have found narrative expression from Ancient Greece to the present day.

Unbeknownst to itself, the Western tradition is founded on violent catastrophe, and the wounds of this history are deeply embedded in its cultural memory. Homer's poems, "The Iliad" and "The Odyssey," commemorate a war that led to the capture and obliteration of an ancient city called Troy. Looming behind Troy lies a much larger catastrophe, the massive "systems collapse" that swept across the Aegean and Mediterranean East sometime around 1200 BCE and that wiped out Bronze Age palaces on the Greek mainland, on Crete, Cyprus, in the Levant and Asia Minor, and that threw these civilizations back into a prehistoric state, a truly "Dark Age," for half a millennium. How such massive changes could have come about in so many places at once and in so short a time—seemingly in a blink of the eye, though it probably took less than a century—is one of the great mysteries of the ancient world. Warfare was involved, but the evidence points primarily to destruction by natural and not human forces, earthquakes and fires first and foremost, while a host of further factors have been conjectured, from droughts and floods to drastic climate changes.

Homer's epics preserve a distorted memory of this collapse: they encode this trauma in their narrative form and substance, which complicates their understanding as celebrations of heroic glory. This presentation will unravel some of the mysteries that haunt Homeric Troy, in addition to rereading the poems as an invitation to deep ethical and aesthetic discomfort and reflection, not glorification. A short excerpt from Smoke, Ashes, Fable, a film montage that formed part of an exhibition from 2002 by the South African multi-media artist William Kentridge, will help us think through the broader question of what it means to live with the present and imminent realities of our own massive systems collapse today.

Gillian Conoley received the 2017 Shelley Memorial Award for lifetime achievement from the Poetry Society of America. Her most recent collection is A Little More Red Sun on the Human: New and Selected Poems, published with Nightboat Books. She is the author of seven previous books, including PEACE, an Academy of American Poets Standout Book and a finalist for the Los Angeles Times Book Prize. Conoley’s translations of three books by Henri Michaux, Thousand Times Broken, appeared in 2014 with City Lights. Conoley is poet-in-residence and professor of English at Sonoma State University, where she edits Volt.

This is a free, online-only program; pre-register to receive a link to the live-stream video 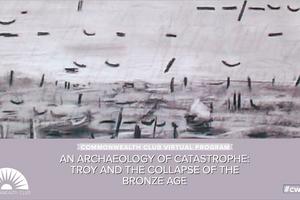 An Archaeology of Catastrophe: Troy and the Collapse of the Bronze Age