Marijuana Addiction in the Age of Legal Weed

Generation X writer Neal Pollack thought he had it all: a good writing career, a strong marriage, even a lucrative 3-day run on "Jeopardy"! That brought him national attention. Like many in his generation, he also smoked a lot of marijuana. He had discovered that food, music and even his beloved yoga was much better when he smoked.

In 2014, as several states in the country legalized pot, Pollack scored a writing gig for a marijuana site that provided free weed. He saw his drug use as harmless and joked about it often in his writing. But as more states, including California, began to legalize the drug, Pollack’s life began to fall apart, in part because of his drug use. Both of his parents died and he soon found himself spiraling out of control, sometimes in public. By 2018, Pollack admitted publicly he had a marijuana addiction and set about to conquer it, through honesty . . . and humor.

Pollack’s new book, Pothead, is about coming to terms with his marijuana problems just as the country increased its recreational availability. The book is a cautionary and timely tale for those who think the drug isn’t dangerous and can’t cause serious addictive problems. Join us for a special evening program as Pollack discusses his story with Los Angeles novelist Bucky Sinister.

This free, online-only program; pre-register to receive a link to the live-stream program 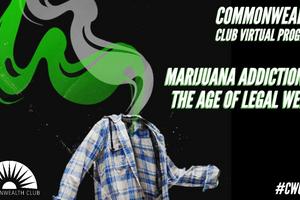 MARIJUANA ADDICTION IN THE AGE OF LEGAL WEED