Russia’s interference in the 2016 election wasn’t a new problem with our Cold War adversary. Their meddling in 2016 marked only the latest chapter of a hidden and revelatory history. In his new book Rigged, David Shimer tells the sweeping story of covert electoral interference past and present. He exposes decades of secret operations—by the KGB, the CIA and Vladimir Putin's Russia—to shape electoral outcomes.

John Brennan, as director of the CIA during the 2016 election, was at the forefront of this issue. In January 2017, Brennan, along with former FBI Director James Comey and others, briefed President-elect Donald Trump on the Russian interference efforts. Following his departure, he became a vocal critic of the Trump administration, culminating in Trump taking the unprecedented step of revoking his security clearance in 2018.

Both Shimer and Brennan believe that understanding 2016 as one battle in a much longer war is essential to understanding the critical threat currently posed to America's electoral sovereignty. With less than six months until the 2020 election, join us for a conversation for two leading voices on a critical issue.

Copies of Rigged by David Shimer are available for purchase during checkout (for delivery to U.S. domestic addresses only)

In Conversation with Laura Rosenberger 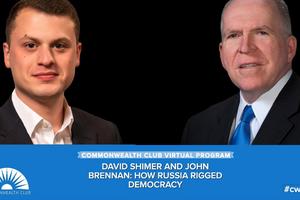