Join us for a discussion with Rick Welts and Hannah Gordon, two leaders who have made an indelible impact in sports for LGBTQ rights through their courage and resiliency.

Ricke Welts became a member of the Basketball Hall of Fame in 2018. For the past 8 years, he has been president and chief operating officer of the Golden State Warriors, overseeing all business-related operations for the team, including the new Chase Center and Thrive City in San Francisco. In 2011, he publicly announced that he was gay—in a front-page New York Times story. For his work on diversity and inclusion in sports, he has been honored with the United States Tennis Association 2011 ICON Award, the GLSEN Respect Award, the GLAAD Davison/Valentini Award, the Anti-Defamation League's Torch of Liberty Award, and he was the celebrity grand marshall of the San Francisco Pride parade in 2015.

Hannah Gordon is the chief administrative officer and general counsel for the San Francisco 49ers. She oversees legal, public affairs and strategic communications, risk management, community relations, the 49ers Foundation, fan engagement and the 49ers Museum. She is also the secretary of the Bay Area Host Committee and has been involved with events such as Super Bowl 50, WrestleMania 31, Beyoncé's Formation World Tour, the Copa America Centenario and the 2019 College Football Playoff National Championship. She is also active on league-wide matters and has served on multiple intra-league working groups. 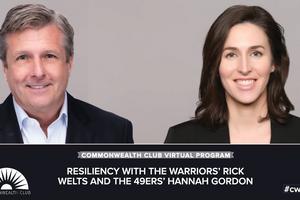