Edward Larson: Summer for the Gods

Join us for a virtual conversation with Edward Larson to commemorate the 20th anniversary of his Pulitzer Prize-winning history Summer for the Gods, the definitive account of the pivotal battle between creationism and evolution. In his new epilogue, Larson assesses the lasting resonance of the Scopes Trial as clashes continue between science and religion, and about free speech and academic freedom.

Larson takes us back to the 1920s, when Protestant fundamentalists started a national campaign against the teaching of Darwinism in American schools. Tennessee was the first state to honor the movement by banning Darwinism from its curriculum. But the American Civil Liberties Union (ACLU) challenged the ban and requested that teacher John Scopes reject it outright in his classroom, resulting in a 1925 trial of mythic proportions with a dramatic legal matchup that ignited massive media attention. Represented by Clarence Darrow and the ACLU, John Scopes was pitted against William Jennings Bryan and the anti-Darwinists.

The ensuing debate over the respective places of science and religion in public education remains a continuing conflict in cities and states throughout the United States to this day.

This is a free program, but please consider making a donation during checkout

This event is online-only; pre-register to receive a link to the live-stream program

Edward Larson
University Professor of History, and Darling Chair in Law, Pepperdine University; Author, Summer for the Gods: The Scopes Trial and America’s Continuing Debate Over Science and Religion 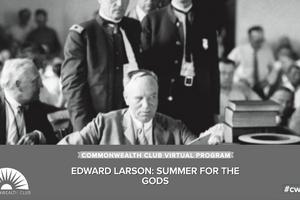 EDWARD LARSON: SUMMER FOR THE GODS