Since the end of the Cold War, the global perception of the United States has progressively morphed from dominant international leader to disorganized entity. Robert Gates, defense secretary under Presidents George W. Bush and Barack Obama, asserts that this transformation is the result of the failure of political leaders to understand the complexity of American power, its expansiveness, and its limitations.

Sec. Gates makes a clear case that the successful exercise of power is not limited to military action, but should encompass other facets, including diplomacy, economics, strategic communications, intelligence, technology, ideology and cyber. It should also require learning—and abiding by—the lessons of the past, and avoiding the misuse of power.

Join Sec. Gates and former Secretary of Defense James Mattis as they discuss the future of U.S. national security.

In Conversation with James Mattis 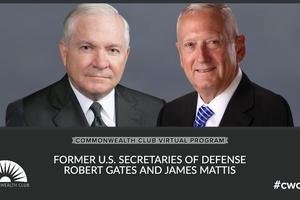