The Supreme Court and LGBTQ Rights

Monday's U.S. Supreme Court ruling supporting workplace protections for LGBT employees surprised many people—the 6–3 opinion was written by conservative appointee Neal Gorsuch, who was joined by Chief Justice John Roberts as well as the liberal members of the court.

Join us for a timely discussion with some real legal eagles. Once again, LGBTQ rights are up for judgment by the U.S. Supreme Court. The SCOTUS is issuing rulings on anti-discrimination protections for LGBTQ people in employment. The cases involved are Bostock v. Clayton County, Ga., Altitude Express Inc. v. Zarda and R.G. & G.R. Harris Funeral Homes Inc. v. Equal Employment Opportunity Commission.

Felicia Medina is a queer, latina attorney and founding partner of Medina Orthwein LLP. Her practice focuses on individual and class action employment discrimination and harassment cases relating to race, gender, gender identity and expression, and sexual orientation, as well as wage and hour collective actions. She has been honored as a 2018 San Francisco Business Times OUTstanding Voices, 2017 Daily Journal Leading Labor and Employment Attorneys in California; a 2016 National LGBT Bar Association – Best LGBT Lawyer Under 40; a 2015 National Diversity Council Most Powerful and Influential Woman; and a Law360 2014 Minority Power Broker. Felicia received her law degree from Yale Law School in 2006.

Kevin Love Hubbard is a partner at Medina Orthwein LLP. He has dedicated his career to civil rights and brings extensive experience in civil rights litigation to his firm, including individual and class employment discrimination and wage and hour claims, as well as constitutional claims involving police and prison misconduct. Prior to joining Medina Orthwein, Kevin represented nationwide classes and collectives of women with claims of gender discrimination, as well as individuals with cutting-edge employment claims, including claims of LGBTQ+ discrimination. Kevin graduated from Yale Law School in 2012.

Imani Rupert-Gordon is the executive director for the National Center for Lesbian Rights. NCLR is a national legal organization committed to advancing the civil and human rights of lesbian, gay, bisexual, and transgender people and their families through litigation, legislation, policy, and public education. Previously, she served as the executive director for Affinity Community Services, a social justice organization that works with the entire LGBTQ community with a focus on Black women. She also served as the director of the Broadway Youth Center, a division of Howard Brown Health in Chicago, which has served more than 1,500 LGBTQ youth experiencing homelessness and housing instability. In 2019, the Illinois Human Rights Commission presented her with its 2019 Activism Award. This year she was recognized by the Chicago Foundation for Women with a 2020 Impact Award. Rupert-Gordon received a Master’s degree from the University of Chicago School of Social Service Administration and a Bachelor’s degree in Sociology from the University of California, Santa Barbara

Rev. Elena Rose Vera, a Filipina-Ashkenazi trans woman originally from rural Oregon, joined Trans Lifeline’s executive team in May 2018. A longtime organizer, educator and performing artist, she holds an M.Div. focused on social justice and community care work and was ordained as a minister by the Church for the Fellowship of All Peoples, a historic civil-rights church in San Francisco. Rev. Vera is proud to bring her deep commitment to love, support and liberation for trans people everywhere to her work with Trans Lifeline.

This is a free, online-only program; please pre-register to receive a link to the live-stream event 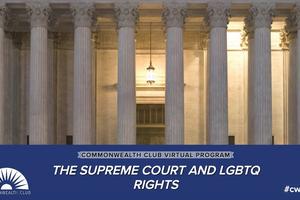 The Supreme Court and LGBTQ Rights