The exploitation of their Aunt Huguette by her professional advisors and caregivers horrified the Clark family. By the time she passed away in 2011 at age 104, Huguette’s attorney, accountant and medical caretakers had manipulated her out of nearly $40 million. The 2013 book, Empty Mansions, told some of the story.

Determined to bring good from a terrible situation, the Clark family resolved to protect vulnerable elders across the country. In 2018, multiple generations of the Clark family—descendants of Huguette’s father, Senator William A. Clark—established the Huguette Clark Foundation to protect vulnerable seniors and hold accountable those who abuse them.

Ian Clark Devine is a long-time leader in nonprofit and foundation management. He is a great-grand-nephew of the late Huguette Clark, whose financial exploitation sparked his interest in the protection of elders.

Elder abuse affects millions of people across all socioeconomic levels. Isolation, mental illness and dementia exacerbate the problem by making elders even more susceptible to those who would exploit them. With some 10,000 Americans reaching age 65 every day and life expectancies lengthening, elder abuse is a societal concern that could be on the rise for decades. Recognizing this concern, the United Nations has designated June 15 as World Elder Abuse Awareness Day.

What are the signs of elder abuse? What can be done to stop it? How are legal protections, established in California more than a decade ago, performing to protect seniors and their assets? Join an important conversation about what we can do to protect some of the most vulnerable members of our society

This program will be online-only; pre-register to receive access to it

This is a free program; please consider making a donation during the registration process to support the production of our online programs 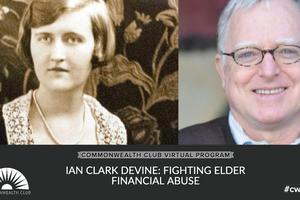