Veteran journalist Jonathan Karl has known and covered Donald Trump longer than any other White House reporter. And during this time he has been praised, has fought, and been branded an enemy of the people by President Trump himself.

Karl says we have never seen a president like this—norm-breaking, rule-busting, dangerously reckless to some and an overdue force for change to others. He goes on to argue that we are witnessing the reshaping of the presidency.

Get an extraordinary look at the president, the person and those closest to him. Karl will discuss the key moments defining the Trump presidency and offers his personal insights to what it is like being front row at the "Trump Show."

In conversation with Nassir Ghaemi

Professor of Psychiatry, Tufts University School of Medicine; Author, A First-Rate Madness: Uncovering the Links Between Leadership and Mental Health 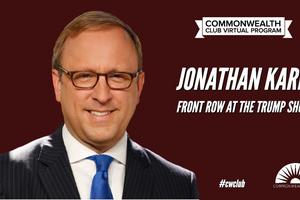