Join us to learn the story behind the AIDS Memorial Quilt, as the Quilt's caretakers share their personal stories reflecting on 40 years of the pandemic.

We'll discuss the Quilt's deep roots in San Francisco; meet the "Mother of the AIDS Quilt, who has been there since the beginning and is still there today to "take care of her boys"; learn about the Quilt's move to the care of the National AIDS memorial and how it is a powerful tool to teach—and reach—today's generation about HIV/AIDS; and hear personal stories behind the panels of the Quilt.

While the United States and the world are reeling from the COVID-19 pandemic, learn about the parallels and differences between this pandemic and the AIDS pandemic, and how the Quilt provided healing and became a source of support to today's first-responders via mask-making.

John Cunningham has been the executive director of the National AIDS Memorial since 2009. He is a fifth generation Californian, having grown up in the East Bay before relocating to New England at the age of seven. A graduate of the University of California at Berkeley, he received a degree in political science and organizational behavior. Cunningham presently resides in Oakland with his husband Joel and their dog Billie. John’s professional career has spanned over 25 years working for several Fortune 500 companies, holding management positions in human resources, risk management and organizational development. In 1993 he founded and served as president of Golden Gate Granite Group, focusing on human capital management and effectiveness. In 2004 he realigned his career, merging his passion for community activism with his relationship development skills, joining the nonprofit Positive Resource Center as director of development. Cunningham has held numerous nonprofit board level positions, having served as president of the Castro Community Business Alliance, board chair of the New Hampshire AIDS Foundation, vice president of Folsom Street Events, and board member of Positive Resource Center.

Mike Smith is the co-founder of the NAMES Project AIDS Memorial Quilt and served as managing director there from 1987 to 1989. During his tenure, the Quilt grew from an idea to more than 18,000 memorial panels in 20 countries. In 1989, the organization was nominated for the Nobel Peace Prize and the film about the Quilt, Common Threads, received the Academy Award for Best Documentary. He returned to the NAMES Project in 1996 to produce the last full-scale display of the Quilt in Washington DC that year. Smith recently rejoined the Quilt team as a consultant to the National AIDS Memorial, the new stewards of the Quilt, and has been helping manage the Quilt's transfer from Atlanta to San Francisco. Mike’s other leadership roles has included serving as executive director of the LGBT Community Center of Colorado from 1997 to 2001 and chairing Denver Mayor Wellington Webb’s LGBT Advisory Council that drafted and advocated for domestic partner rights and transgender rights legislation that became law there in 2002. Mike Smith was Executive Director of the AIDS Emergency Fund & Breast Cancer Emergency Fund (AEF & BCEF) from 2002 to 2015. Mike’s undergraduate degree is from Georgetown University’s School of Foreign Service. He received his MBA from Stanford University Graduate School of Business. He resides in San Francisco, CA and Asheville, NC.

Gert McMullin is the Quilt conservator and production manager at National AIDS Memorial. She grew up in a loving, raucous Oakland Hills family. In the 1980’s she emigrated to the Castro District of San Francisco. While working as a box office manager and as Macy’s “cosmetic sales gal”, she was well known among the Union Square retail workers. It was common to hear the comment, “Did you see what she was wearing today?” She would often change her name tag to reflect her mood. “Gert” was the girl that was sarcastic and a bit caustic. During this period she could be found sharing those magical days of newfound freedom and acceptance in the Castro. It was a magical time when gay men and lesbians came from around the world to experience true acceptance. When AIDS began to attack her friends, Gert McMullin was born. She was heartbroken and angry that this would happen to her boys. In April 1987, Gert went to a meeting about making a memorial quilt. There were only 5 gay men and Gert, and she realized that these men knew nothing about sewing. She made her first quilt for activist Roger Lyon and she has not stopped sewing in all of these 33 years. Gert is the only person that has caressed and/or had a hand in sewing each and every panel of the AIDS Memorial Quilt. “I loved my friends," she says. "Through all of the tragedy and horror of watching all of my friends die one by one, I am truly lucky to have found the Quilt. It and the people who work with it saved my life. I walk through those doors every day to thank it. Everyday.” 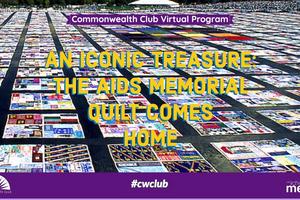