Bakari Sellers became the youngest elected official in the country at the age of 22 when he won a seat in South Carolina’s House of Representatives. He argues, however, that his journey began long before he was born. His family faced many struggles as a part of the South's dwindling rural, black working class—losing access to health care as rural hospitals disappeared; attempting to make ends meet as the factories people relied on shut down and moved overseas; attempting to hold on to precious traditions as towns eroded; and forging a path forward without succumbing to despair—these are all facets of not only his life, but of an entire community’s.

In My Vanishing Country, Bakari Sellers tells the story of his father’s rise to become a civil rights hero, a member of the Student Non-Violent Coordinating Committee (SNCC), and a role model for his own developing identity as a father to newborn twins. Join Sellers at INFORUM, where he will tell his deeply personal story of hope in the face of adversity and a history that is reflective of countless families in the American south. This conversation will be moderated by PolicyLink President and CEO Dr. Michael McAfee.

This event will be online-only; pre-register for a link to the live-stream program 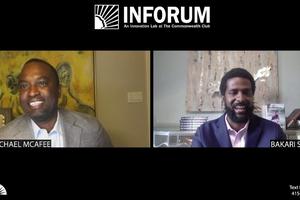