Will Climate Matter in the Election?

After a fleeting moment atop the national political agenda last year, climate change has been eclipsed by the global pandemic. A recent poll from Yale found that public engagement on climate change is at or near historic levels. But will that matter when people vote? The Environmental Voter Project asserts that many people who say they care about climate and the environment don’t actually cast ballots. Further, when talking to pollsters they lie and say they did vote.

Join us with Vannessa Hauc, journalist and senior correspondent at Noticias Telemundo, Jeff Nesbit, executive director at Climate Nexus, and Nathaniel Stinnett, founder and executive director of the Environmental Voter Project, for a conversation on climate coverage in the race for the presidency.

This program is generously underwritten by the Erol Foundation

If you would like to help support production costs for this event, please make a donation when you register

There will be an opportunity to submit audience questions to panelists via our YouTube live stream chat box. 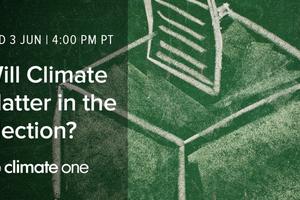 Will Climate Matter in the Election?