The “Trump effect” on our democracy reaches far beyond 4-year presidential terms. President Trump has highlighted a chasm among the American people, revealing a fierce “us vs. them” mentality that might not be amended depending on who is elected in 2020.

Many Americans feel the rest of the country is building a future that doesn’t have a place for them. Why would they want to participate in the systems that have led to their disenfranchisement? Popular political commentator David Frum believes there is a way for those excluded from Trump’s America to reclaim their democracy and reshape the political landscape.

In his new book, Trumpocalypse: Restoring American Democracy, Frum outlines a map for the reinvention of American democracy and world leadership in the wake of Trump’s historic presidency. Frum argues that the United States is experiencing great trauma, and we need to do better—for ourselves, for our neighbors, for our nation. Join us for a virtual conversation as David Frum makes the case for believing in the possibilities of a united America once again. 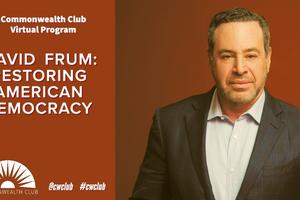