Arlan Hamilton’s story is one made for the movies. In 2015, she was homeless, sleeping on the floors of the San Francisco airport, and dreaming of making it big in the venture capital world. As a gay black woman, she knew she didn’t fit the typical mold of a VC superstar, but she also knew that there were countless other founders and funders whose potential remained underestimated and untapped because they were different. With zero connections in Silicon Valley and a single laptop, she founded Backstage Capital—a seed-stage investment fund that has since garnered national recognition and invested $5 million in more than 100 start-ups founded by minorities.

Join Hamilton at INFORUM, where she will share her incredible story of triumph in the face of systematic adversity, and how she defied expectations in hopes of inspiring an entire industry to change for the better. This conversation will be moderated by Megan Rose Dickey, senior reporter at TechCrunch.

Founder, Backstage Capital; Author, It's About Damn Time: How to Turn Being Underestimated into Your Greatest Advantage 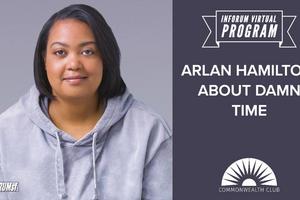