Richard Haass: A Guide to the World Today

Ambassador Richard Haass is a veteran diplomat and a prominent voice on American foreign policy. He is now in his 17th year as president of the Council on Foreign Relations, an independent, nonpartisan membership organization dedicated to helping people better understand foreign policy choices facing the United States and other countries.

Ambassador Haass previously served as Principal Advisor to Secretary of State Colin Powell as well as U.S. Coordinator for policy toward the future of Afghanistan and and as U.S envoy to the Northern Ireland peace process. He was also special assistant to President George H.W. Bush and senior director for Near East and South Asian affairs at the National Security Council.

In his 14th and newest book, Ambassador Haass seeks to help us all navigate a time in which many of our biggest challenges, including pandemics and terrorism, come from beyond our border. Join an important conversation about what Ambassador Haass calls the new normal of the 21st century and the global literacy we all need to make the most informed choices. 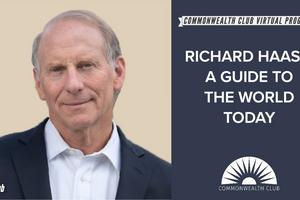 RICHARD HAASS: A GUIDE TO THE WORLD TODAY