A Decade of Oil: From Deepwater Horizon to Deflation

Ten years ago, a very different crisis was gripping the country as 500 million gallons of oil gushed into the Gulf of Mexico, taking lives and threatening fishing, tourism and more. The nation’s worst oil disaster cost BP an estimated $145 billion in cleanup costs and penalties. Now the industry is experiencing another crisis within a pandemic, as oil prices collapsed to historic lows in April and are expected to remain volatile.

What’s next in the industry’s uncertain future? How will the collapse of oil prices impact gradual efforts to shift away from fossil fuels? Join us for a conversation on the past, present and future of oil with Bill Reilly, former EPA administrator and co-chair of the National Commission on the BP Deepwater Horizon Oil Spill, Heather Richards, energy reporter at E&E News, and John Hofmeister, former president of Shell Oil Company. 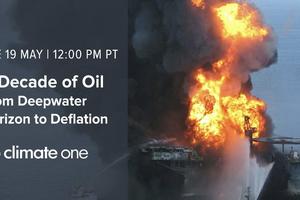 A Decade of Oil: From Deepwater Horizon to Deflation