Join a panel of passionate former Pride board members who will share their experiences volunteering for the organization as it celebrates its 50 year anniversary this year.

Jacquelene Bishop owns and operates her own CPA firm in the East Bay, serving small businesses and their owners. She sat on the Pride board from 2016–2019, serving as the treasurer the first two years and as president the third.

Ken Jones joined the Parade in 1980; and served as its first co-chair of outreach, charged with bringing more “traditionally under/non/mis-represented segments of the lesbian and gay communities” into the movement. Early efforts including giving people of color an opportunity to gather and march together as their own contingent and utilizing the Hot Colors Event at the End-up to bring people of color together the night before Pride. He continued with the organization for more than a decade, serving as co-chair and president. Jones presently hosts small groups in an historical walk through the Castro during the 80s and 90s.

Michelle Meow is the former president of SF Pride. She is the producer and host of "The Michelle Meow Show," which airs on KBCW TV and KPIX TV, and online on the Progressive Voices Radio Network. The is a member of The Commonwealth Club's Board of Governors, and she produces about 50 programs a year at the Club, featuring LGBTQI thought leaders.

Teddy Witherington currently serves as the deputy director at the Impact Fund. The Impact Fund is dedicated to impact litigation for social justice. Prior to that he served CMO at Out & Equal Workplace Advocates. He was the executive director of the San Francisco Gay Men’s Chorus (2007–2012), executive director of San Francisco LGBT Pride (1997–2006), and as the festival producer of the London LGBT Pride Festival (1992-1997).

Made possible by the generous support of Comcast 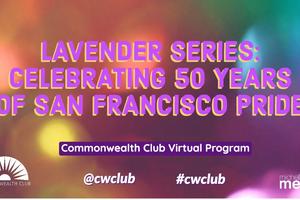