Let the People Pick the President: The Case for Abolishing the Electoral College

Join us virtually as we discuss why twice in the last five elections the Electoral College vote has overridden the popular vote, creating a false impression of a country divided into red and blue states, when we are actually purple from coast to coast. In addition, millions of Americans always find that their votes didn't matter anyway, because only a handful of battleground states decide who becomes the next president. In this thoroughly researched and engaging call to arms, Jesse Wegman draws upon the history of the founding era, as well as information gleaned from 21st century Democratic and Republican presidential campaigns, to make a powerful case for abolishing what he calls the antiquated and antidemocratic Electoral College.

Wegman argues that we can at long last make every vote in the United States count―and restore belief in our democratic system.

Visit your local independent store or Barnes and Noble to purchase a copy of Jesse’s book.

Member of the Editorial Board, The New York Times; Author, Let the People Pick the President: The Case for Abolishing the Electoral College

In Conversation With Farhad Manjoo 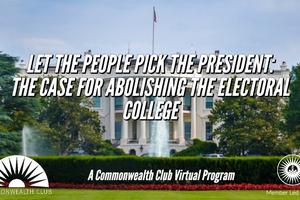 Let the People Pick the President: The Case for Abolishing the Electoral College