The Half of It: Director Alice Wu and Star Leah Lewis

Alice Wu's new film The Half of It tells the coming-of-age story of smart but cash-strapped teen Ellie Chu, who agrees to write a love letter for a jock to his crush. Chu doesn't expect to become his friend—or fall for his crush. The film, scheduled for a May 1 release on Netflix, is the second film from writer/producer/director Wu.

Join us for a conversation with Alice Wu and the film's star, Leah Lewis.

Writer, Director and Producer, The Half of It; Director, Saving Face; Twitter @thatalicewu

Actress, The Half of It; Singer; Dancer; Twitter @leahmlewis 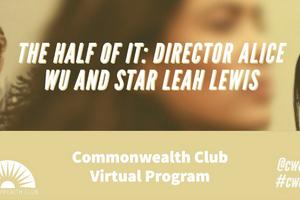 The Half of It: Director Alice Wu and Star Leah Lewis