Please join The Commonwealth Club of California and UC Berkeley’s Townsend Center for the Humanities for the second in a series of dialogues on catastrophe, storytelling and the present moment. In “Climate Change and Sacred Groves,” Townsend Center scholar Sugata Ray will meet with visual artist Ranu Mukherjee to investigate the relationship between the natural world and the sacred realm, especially as it has developed in India over the last several centuries of civilization and the rise of the Anthropocene era.

In his most recent book, Climate Change and the Art of Devotion, Sugata shows how a site-specific and ecologically grounded theology emerged in northern India in the wake of the Little Ice Age (ca. 1550–1850), an epoch marked by climatic catastrophes across the globe. His interests dovetail in unexpected and compelling ways with Ranu’s visionary and captivating recent work, which positions the banyan tree as a meeting point between ecology and culture. Their conversation will be an opportunity for viewers to contemplate and rethink the role of art as it relates to contemporary concerns around climate, disease, human flourishing and the sacred.

Sugata Ray is associate professor of South and Southeast Asian art in the History of Art Department at the University of California, Berkeley. His research and writing focus on climate change and the visual arts from the 1500s onward. Ray is the author of Climate Change and the Art of Devotion: Geoaesthetics in the Land of Krishna, 1550–1850 (2019); Water Histories of South Asia: The Materiality of Liquescence (2019; coedited); and Ecologies, Aesthetics, and Histories of Art (forthcoming; coedited).

Ranu Mukherjee is a visual artist who makes paintings, animations and large-scale installations. Her current work focuses on shifting senses of ecology, non-human agency, diaspora, migration and transnational feminist experience. Her most recent installation was presented at the ecologically focused 2019 Karachi Biennale; she has exhibited solo at the San Jose Museum of Art, the Los Angeles Museum of Contemporary Art, the Asian Art Museum, and the de Young Museum. She is an associate professor in graduate fine art at the California College of the Arts. Mukherjee is represented by Gallery Wendi Norris.

Artwork from The Met (in public domain): "Krishna and Balarama by a River: Page from a Dispersed Bhagavata Purana (Ancient Stories of Lord Vishnu)"

Part one in this series, “The Book of Exodus,” can be viewed here. 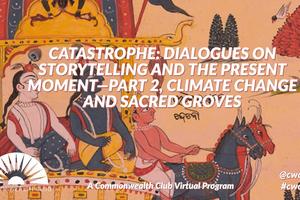 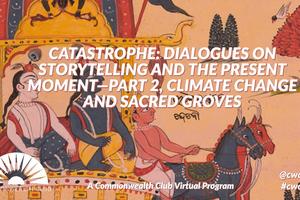