Linda Sarsour and Alicia Garza: We Are Not Here to Be Bystanders

One day after the inauguration of President Donald J. Trump, the worldwide Women’s March gathered people from all seven continents to send a bold message that women’s rights are human rights. It was one of the largest single-day protests in U.S. history, advocating for women’s rights, immigration reform, racial equality and more.

In her new book, We Are Not Here to Be Bystanders, award-winning activist Linda Sarsour chronicles her intersectional experiences growing up as the daughter of immigrant parents, as a Muslim woman unshaken in her faith in a post 9/11 world, as a co-organizer of the Women’s March, and as a leader in the decades-long fight for justice. Join her, in conversation with internationally recognized organizer Alicia Garza, to learn about the power of mobilization and community when fighting for lasting change.

Visit Barnes and Noble to purchase a copy of Sarsour's book

Racial Justice and Civil Rights Activist; Community Organizer; Author, We Are Not Here to Be Bystanders 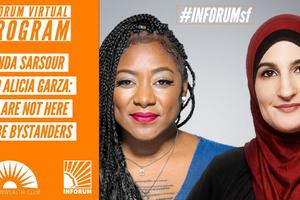 LINDA SARSOUR AND ALICIA GARZA: WE ARE NOT HERE TO BE BYSTANDERS