Join us for a rare conversation with Janet Napolitano about the societal impact of COVID-19 on universities and the U.C. system in particular, as well as the implications for national security now and in the aftermath of the COVID crisis.

Napolitano is the 20th president of the University of California and the first woman to serve in this role. She leads a university system of 10 campuses, five medical centers, three affiliated national laboratories, and a statewide agriculture and natural resources program. She also served as the U.S. secretary of homeland security from 2009 to 2013, as governor of Arizona from 2003 to 2009, as attorney general of Arizona from 1998 to 2003, and as U.S. attorney for the district of Arizona from 1993 to 1997. Napolitano earned a B.S. degree (summa cum laude in political science) from Santa Clara University, where she was the university’s first female valedictorian. She received her law degree from the University of Virginia School of Law. 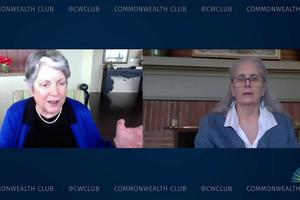